One of the difficulties of urban living is the need to co-exist with others. This can be very difficult sometimes, especially if there is music (bad) and partying (loud) involved. Add to that a weed infested yard and you have the makings of neighbours from hell.

So we had a chat with the landlord next door and offered to buy the property should they be in the mood to sell.

Lo and behold! A couple of months later we received the phone call. "We want to sell. Are you interested??"  Hell yes!!!! We had to scramble to get the cash together as no-one will give two sixty somethings a bond, but we did it.

The property has a two and a three bed-roomed cottage on it. 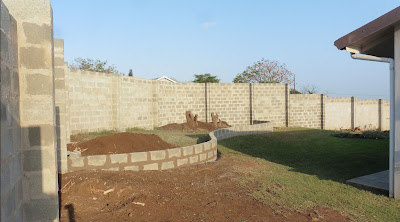 The first item on the agenda was to get rid of all the alien vegetation. The stumps of the Syringas are still visible. It took a whole year to ensure that this scourge was properly dead. This area in front of the two-bedroom cottage will eventually be the entertainment area.

The wall goes all the way around the property. We are still busy finishing parts of the wall. On the left are three different Leonotis leonorus plants. We have the common orange in the middle. 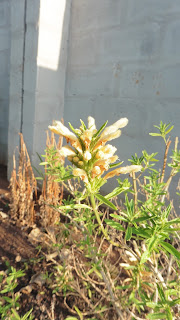 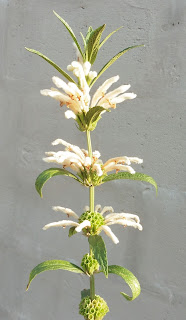 On the left is the smaller specimen with a lovely gold colour, and the white one on the right. 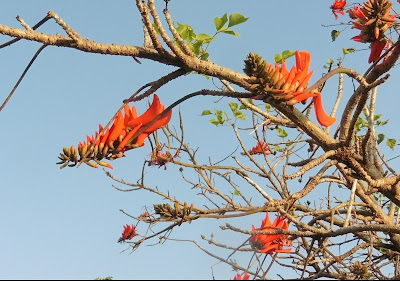 The two bedroom cottage is called Umsinsi Cottage, named after the beautiful coral trees growing in the garden.

"You never have time out" and "this job is 24/7" were the warnings we were given when we did the market research to start our guest house.

How true that has turned out to be. Now, 5 years later, we are finally in a position where we can go on holiday. We are going to get the opportunity to be guests instead of hosts. This switch is going to be quite a change for us.

We are leaving for a month to visit our son in Canada and to catch up with some old friends. Some we have not seen in 50 years. After that we are taking a road trip to San Francisco.

So while we are away, we are leaving our guest house in the very capable hands of Liz Hattingh. 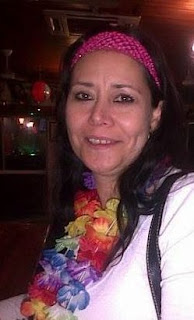 We will be back in the beginning of June after a well deserved break.