No, not the kind that goes whoosh through the sky, the kind that lies in dark corners and make you feel guilty that you did not finished them, AKA unfinished objects.

So while packing my vast stash of craft materials and tools (and I really mean VAST), I came across an equally vast stash of things that need to be finished. I love re-purposing clothes so I have a couple of boxes marked "Clothes for Recycling".

I recycled some old denims and all the bags need are some clasps. I still have to figure that one out. 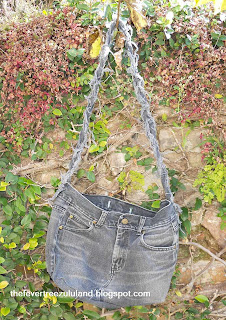 I Battled for a while to figure out how to do the straps, but I got that one sorted. 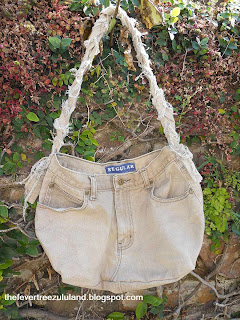 My next challenge is going to be the clasps. I do not want a conventional button. Something a little more creative is in order. 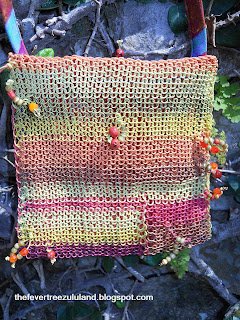 Believe it or not, but this little bag is made from knitted computer cable.

Those old grey cables that used to connect printers to towers have the most beautiful coloured wire inside. A lining and a long matching strap and there you have a nifty little purse.

We went up to Hluhluwe this past weekend to start fixing and cleaning and getting ready for the move at the end of the month. We also needed to take Mehlo Shoba, our new caretaker, gardener and general factotum to look after the place for the next two weeks.

I wanted him to see the bigger picture regarding the park, conservation and the fact that his job, as well as the jobs of thousands of others, are all closely interlinked with the park. He had never seen any of the large animals before.It was not long after we entered the park at the Nyalazi Gate that we ran into this young fellow who was really just showing off. 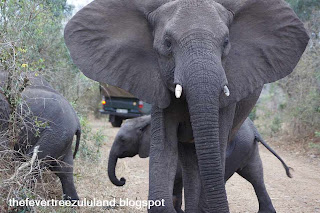 It was late afternoon when we were approaching the Memorial Gate when we ran into this handsome rhino. The reddish colour is from the mud that she wallowed in. 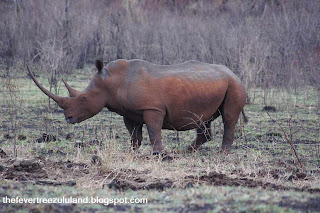 We spent our first night at the guesthouse. Getting up early was a treat as the abundant birdlife seemed to put on a special show for us after the grey day before. The scarlet chested sunbird is particularly special to me. 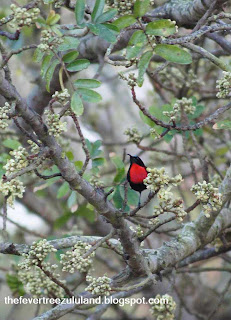 Large parts of the park has had seasonal fires. How many were managed and how many were accidental, I do not know, but the areas affected are huge. It makes for some rather dramatic photographs. 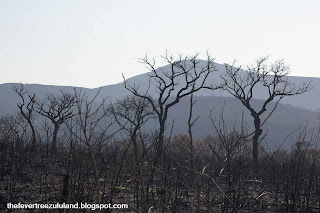 At four in the afternoon we dashed back to try and find some lion for Mehlo, but no luck. The park closes at six in winter, so we had to dash to make it back to the gate before it closes. 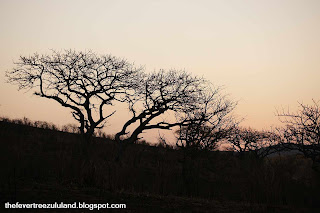 So we headed back home (home? I already feel that the guesthouse is my home) and got to bed early as we were quite exhausted and intended getting up early to hunt those elusive lions. 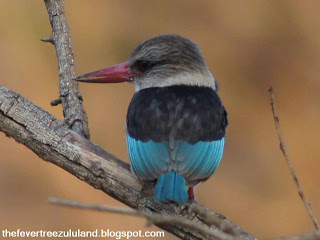 No lions, but we did see this gorgeous brown hooded kingfisher.

On our way back to the house we passed a piece of land where the burnt veld makes a wonderful contrast to the pale trunks of the fever trees. 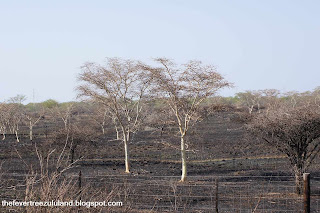 And immediately I remembered where I have seen something similar before. 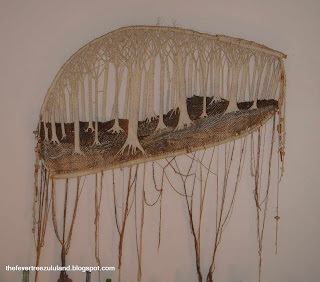 The weaving is an art project my daughter did in grade 11. It hangs in the stairwell in the house in Durban. I think I am going to miss seeing it every day.

Close encounters of the elephant kind 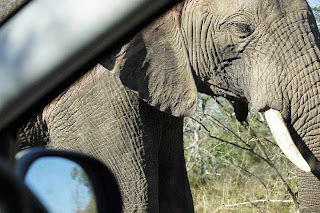 I found another image of the close encounter with the elephants in the park. I sat there blubbering like an idiot with my eyes closed instead of enjoying the moment.
Posted by Tracey at 22:31 No comments:

In all the years that the Hubcap and I have hosted people from all over the world, food was the one topic that never got exhausted.

I enjoy cooking for people. In fact, I have great difficulty in cooking small quantities. I suppose coming from a large family and marrying into an even larger one is the reason that I love really big cooking pots.

So now I am back to compiling menus and shopping lists, trying out all my old recipes I have not touched since the kids were small and rediscovering the joys of baking.

Top of my list is Chocolate Crunchies. This seems to be a purely South African treat as I have not come across them anywhere else in the world. I intend every guest to have a couple of these in a cookie jar with their tea and coffee tray in their rooms.

I have looked all over the web and compared various friends and family recipes, and this is my deluxe version. Here is a link for another variation. 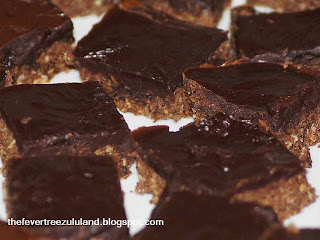 Melt butter and honey and add the bicarb.
Combine the rest of the dry ingredients until crumbly and press down evenly into an oblong greased baking tray and smooth. Best to use the back of a spoon for this.
Bake at 180C for 20 minutes

While the crunchies are baking, prepare the icing.

Microwave 30 seconds and stir vigourously. If any lumps remain, microwave another 20 seconds and stir again. Repeat until smooth. Getting the consistency right is important. It took me a couple of tries but stick with it, it is so worth it. Pour over crunchies and cut into squares just before icing is properly cold. It helps to use a wet knife to stop everything sticking together. Dip the knife in between each cut.

D-Day for the special consent came and went. It turns out that there was an administrative glitch and our special consent was not on the agenda. This means we have to wait another month. AAAaaaargh! I do not think we can survive another 31 days of tension like the last couple of weeks.


Another problem raised its ugly head...Our option to buy was dependent on special consent being granted within the two month period and if we wait for the next town council meeting, we miss that deadline completely.


SO WE WENT AHEAD AND BOUGHT THE PLACE ANYWAY!!!!
The Fever Tree should be opening for business on the 1st October 2012.


Special consent or not, I am moving. We can sort the legalities out later. It is just a question of formalities. Hluhluwe depends on tourism so it is very unlikely we will be turned down.


I am packing and sorting and packing at a pace that is sometimes too fast and sometimes too slow. Twenty six years worth of junk needs to be sifted through. Half done projects, craft materials, beads, half made clothes that no longer fit me, and memories from the kids' schooldays. It is rather exhausting on an emotional level. So many places and times revisited if only in thought.


Here and there I find projects can be completed with just a little bit of effort. I am going to set myself a target of finishing at least one UFO (unfinished object) a week. 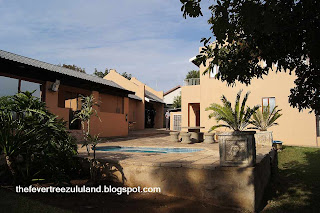 So, for the first time, here is a picture of where we are moving to. The place is a bit grim. It was a holiday home for a wealthy family from Johannesburg but it never had the care and attention a home should have. So my first month is going to be spent cleaning, painting, decorating and getting the garden going, The veg garden is small and needs to be tripled as we want to offer our guests homegrown organic vegetables. The garden is going to be strictly indigenous, except for the fruit trees and veg.


Lots and lots of hard work ahead.
Posted by Tracey at 03:13 No comments: